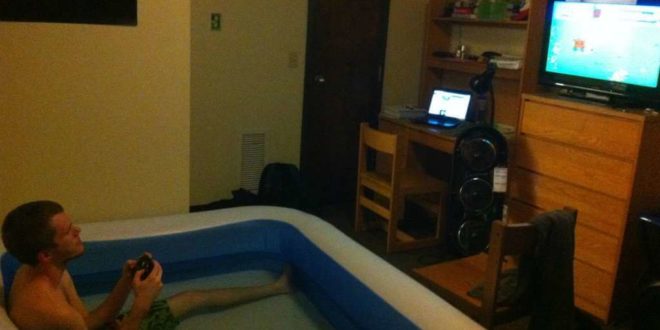 Just a little game sesh while in the hot tub 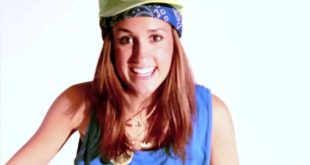 Have you ever sat in your dorm room and just thought; what else does this place need? You already have the TV, surround sound, and much more.. Well, a few college students felt they needed a hot tub and they created exactly that!

Recently, two college students created a blow up hot tub from cheap components. They say held up just fine the last two months and haven’t had any issues from their buildings RA (resident assistant) by simply not giving them the chance to ever see it.

Boy, I don’t have a clue how I could pull this off! Especially weighing in at roughly 1,900 pounds according to a user, it isn’t something you would want to pull off in any dorm. Especially one on a higher floor. As we later found out, you’ll find this dorm room hot tub positioned on the ground floor.

At first, they didn’t think it would fit. After some ingenious thinking, they decided to use a “open source program and built a simulation of our room with our desks, beds, and dressers correctly scaled in it to find the best place to put it. We figured out how to place our tv’s so they would both face the hot tub, and we also made it so we had a clear path to the beds.” says the user from Reddit; “consciousminded”.

Steps to creating your own dorm room hot tub:

“We first laid down a tarp and put towels around the perimeter in case of any spillage from use.”

“We used a 10 X 6 inflatable kiddie pool which we purchased online for around 60 bucks. We then bought 2 cheap coffee makers from Wal-Mart (around 9 bucks apiece) and attached latex tubing to them so they would reach the water. We hook up a slack hose to the sink when we want to fill it, and we use two 5 gallon buckets to take the water out. Emptying takes about 20-30 minutes.”

It appears they have the sink right in their dorm room allowing easy filling for the hot tub.

“This pic was before we got our second coffeemaker, but the setup is still the same. We opened the back of the coffeemaker and cut the outtake tube. We then hooked the latex tube to it so the water would pump back into the pool instead of the brew basket. You have to tape the end of the outtake tube somewhere so the scalding water doesn’t touch the side of the tub, which could melt the plastic!”

“We used some air packaging for that. For the intake we took another latex tube and placed it in the reservoir. The other end was taped to some air packaging as well. We then started playing around with the height that the coffee maker would sit at so it was level with the water. This will create a siphon that would pull in water as the coffeemaker was pumping it out.”

Just like that, there is our dorm room hot tub. I’m really curious what kind of woman they managed to pull from having that hot tub. I can’t imagine pulling this off in my dorm, but might as well embrace it while they have it! Hopefully we don’t see them getting caught.

If you’re wondering how they deal with the humidity coming off the hot tub: “We keep the room well ventilated, so it doesn’t get too humid. My laptop has been running 24/7 with no problems and we’ve been using the tub for the past 2 months.”