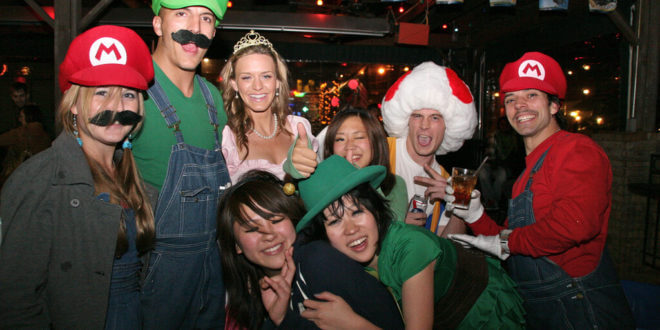 With the video game industry breaking the 21 Billion dollar mark in 2014, not to mention the advent of the “Casual Game” genre; you’d be hard pressed to find anyone of college age that hasn’t played a video game recently.

Not everyone may identify as a “Gamer”, but almost everyone “games”. Therefore, this Video Game Party Theme would be perfect anyone looking to change it up a bit!!

As a result, the Video Game theme is easily relatable and will pretty much guarantee some interesting costumes and a grand old time. The sheer abundance of options when planning such a party makes it a popular choice, as it can adhere to pretty much any budget. So hold on to your joysticks and Game On!

Video Game parties do not happen outdoors. Such a travesty is antithetical to the very idea of gaming. So arrange a room that’s big enough to accommodate your guests and be done with it.

The more important decision is what kind of Video Game Party you’re going for. Are you simply throwing a social mixer with video games as the default icebreaker?

Or are you trying to cater to the more serious gamers of the lot? Well, whatever your intentions, one of the following variants should be right for you with this Video Game Party Theme:

If you’re considering this, then you’ve probably got some game in mind already and the only thing that you really want to do is play with those who share your obsession for as long as possible.

The food, the drink, the costumes, even the opposite sex are all just distractions from your desire to commune with the Gaming Gods.

Parties like these usually last all night and can be quite fun, if a bit taxing on the body. Make sure you have enough consoles or computers to keep everyone happy and don’t forget to have a couple of extra surge protector strips handy as well.

And as difficult as it might be to pull yourself away from the screen, make sure to keep your guests fed and watered every few hours.

As alluded to earlier, this is for those that want to host a general party but have chosen video games as the theme because of their wide reach. The focus here is discussion and social interaction, where people will get to know one another, or more specifically, what kind of gamers their peers happen to be.

Make the costumes mandatory to keep the energy up for the party and select easily recognizable gaming tracks for the party music. You could include gaming consoles if you want, but it would be a good idea to select titles and genres that encourage quick game-play so that everyone gets a turn and no one feels left out.

If you know beforehand that there are a decent number of fans of any particular gaming franchise or genre around, then you might consider taking the risk of committing entirely to said game/genre.

This will allow for more elaborate decoration options and theme specific food and drink.

The caveat is that you’ll probably be catering to a niche crowd, so you might be left with fewer attendees than expected. Still, these kinds of parties can have more of a Convention atmosphere and are quite fun as a result of the dedicated fans in attendance.

One of the best things about a video game theme is that you and your guests are more than spoiled for choice when it comes to costumes. I mean, what popular Movie/Anime/Comic franchise doesn’t have a crappy game that the industry decided to cash in on, am I right?

Throw in casual and retro games and you can basically dress up as anything from Striped Candy to an Overweight Plumber (shh…Nintendo is always listening!) to freaking Iron Man and still stay true to the theme.
That being said, here are a few pointers that can help influence one’s choice:

Mountain Dew. Lots and lots of Mountain Dew. Ok, all jokes aside, you really should stock up on soda. The Video Game theme doesn’t really lend itself to specific drinks or anything like that, so if you must have alcohol. then Beer, Spiked Punch or some simple cocktails like Rum and Coke should be good.

What Would You Do For A Ticket? – Monopoly Party Theme

What Would You Do For A Ticket? – Monopoly Party Theme