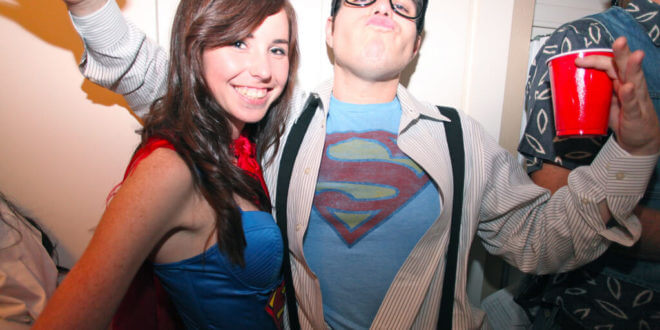 A superhero party theme for your next big event will allow everyone to let their creative spirit out, and be the big hero for the evening!

This is an opportunity for your guests to let their imaginations run wild, and to dress up as their favorite super heroes from the comic books and movies – or even to create their own superhero persona with matching costume from scratch!

The setup for a superhero party theme can be almost anything. Do you want your venue to look like a glacial cavern?

A hidden cave under a mansion? What about a top-secret control room for your superhero crime-fighting team? You could even let your party spot look like a city street or an abandoned warehouse; bonus points if it actually is a warehouse! (That would be a fairly simple decorating job.)

There are virtually no limits to costume ideas for a superhero party theme! You could dress up as a classic superhero in a jumpsuit with a cape, of course, and possibly even mix things up with a unique mask.

You could dress up in a suit, and be in costume as the off-duty superhero’s mild mannered secret persona.

Another option would be to dress up as a less “traditional” superhero, like a Greek or Norse god, or even a guy with a mechanical suit. With so many costume ideas, you should have a lot of variety at your party, and plenty of opportunity to interact with superheroes from different genres!

Just make sure to plan your party well in advance, to give your superheroes plenty of time to hone their secret identities, and put together their costumes.

Of course, being “fully clothed” may not be required; who says a superhero costume can’t be a little racy? In fact, if you’re feeling adventurous, you could specifically throw a “sexy superhero bash!” (We all know of at least one female member of the superhero cast who doesn’t wear much as part of her costume.)

There shouldn’t be many hazards associated with the superhero party theme. In fact, it’s probably one of the safest party themes there are, as far as décor, props and environmental hazards in your party venue.

If anyone chooses to dress up as a super villain instead, make sure that none of your aspiring vigilante crime fighters take their pursuit too seriously after partaking in their beverage of choice to boost their superpowers. You don’t want your party to be shut down because of something silly!

There is really no specific type of drink that goes along with a superhero party theme. If you have a bar set up, make sure that the usual staples are there, and in adequate quantities to quench a superhero’s thirst!

If you want a specific themed beverage, some sort of red punch in a bowl probably wouldn’t go amiss. Perhaps something with caffeine as well as alcohol, to boost your heroes’ superpowers and keep them

Paint Party Theme: Be Prepared For The Paint
Share