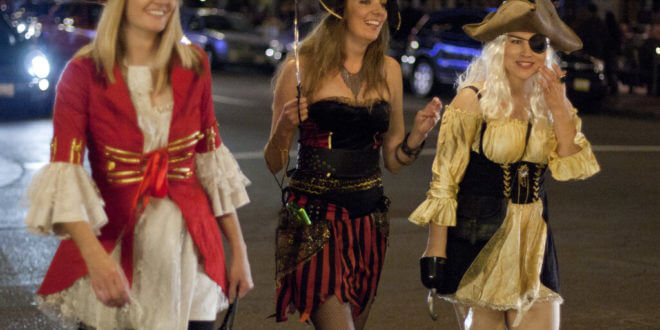 Photo by nathaninsandiego / CC BY

When you put a group of roguish pirates into a pirates and wenches party theme with a large group of giggling, buxom wenches, there can only be one result; fun on the high seas, and lots of booty!

This party theme is a great opportunity for everyone to dress up and act the way they’ve always wanted to. After all, who doesn’t dream of being a pirate when they’re a kid?

This is an opportunity to live out that swashbuckling fantasy with a group of like-minded people, and let your creative juices flow to create your own costume!

Your pirates and wenches party theme can take place in almost any venue! If you are feeling extra creative and live near the ocean or another large body of water, you may even be able to get a boat — your own pirate ship for your party! If you don’t want to find a specific place to host this party, you can even coordinate your own pirate pub crawl!

If you do choose to host the party at a house or other venue, there are certain props that are mandatory for every pirates and wenches party theme! For one, there has to be a treasure chest. After all, what’s a pirate party without some booty?

You also shouldn’t forget to scatter some gold coins around, and perhaps create an aquatic theme. Just be tasteful; you’re going for a rustic pirate tavern, not a pineapple under the sea!

Of course, for a college party, you should absolutely lean more towards the risque, and your party goers should be informed of this well in advance. Perhaps it should be billed as a “rugged pirates and sexy wenches” party theme, to take away any doubts of the types of costumes that are expected.

As a result of attendance at your pirates and wenches party theme, some of your pirates will insist on posing while partaking of their rum; make sure that nobody falls and hits their head! Also, swords and pistols are nearly mandatory parts of a pirate costume.

Make sure nobody gets out of control with them. The eye patch is supposed to be part of the costume; you don’t want anyone to have to wear one full-time after the party!

There is only one appropriate drink for your pirates and wenches party theme, and that is obviously rum! Of course, some of your wenches won’t be able to handle the straight liquor, so make sure that you have plenty of mixers available, and maybe a rum-themed punch for the truly faint of heart.

Make sure that there is plenty to go around; you don’t want the party to leave early, and leave your thirsty pirates wondering why the rum is gone!