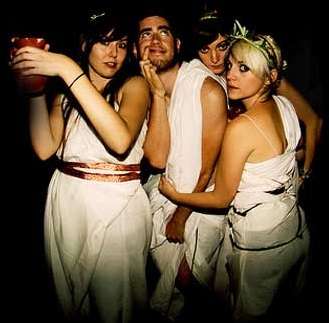 Whats a better way of celebrating the summer and winter Olympics then by creating your own version? What about creating a drunk version of the Olympic games? Without a doubt, this party theme is incredibly fun if done right!

To have a successful Olympics party, make sure everyone participates one way or another. Whether that may be participating in the games or dressing up supporting their country!

This college party theme is fairly straight forward and doesn’t require too much setup. You’ll want to clear out the area that you are hosting the party and make sure you take out all the valuables or anything that you don’t want broken.

You might want to include a prize of some sort; it could be a cash prize or it could just be a bottle of some type of expensive booze. Maybe you could even make a trophy or convert a old one into your Olympics party trophy!

You will want to divide up all your party goers into groups and send each group a invite or instruct them to wear a certain Olympics game color or theme. Maybe they’ll be Canada, Britain and more.. You get the idea. They will then all compete in your games.

With a Olympics party, its essentially just about having a variety of drinking games to create your Olympics games. So if you want to really make your party a hit, have a country theme in each room along with your Olympic game.

Throw some of the countries flags on the walls as decorations and anything else that is related. In the main room of your party, have a big whiteboard that will help you all keep track of who is winning in your drunken stupor.

This party theme is essentially all about the games, so the more; the better. If you can’t have quite a few games going on, we suggest simply not having this party. With all these games; you want all your guests to be participating instead of just sitting around watching a few people compete. Everyone should be a participant one way or another.

This college party event requires 100% participation on both ends.. Both in the party games and in the Olympics costume ideas too. The key is getting creative on this.

With all these different games and sports available in the Olympics, there is bound to be a costume that you can throw together!

Here is a short list of Olympics party theme costumes that you might be able to wear depending how the party theme is set up:

This is your chance to be creative here and try to offer a variety of drinks to your guests! If its just simply too expensive for you, feel free to just throw out some different kinds of beers.

Maybe you could even just get different brands of beer in kegs too though. Really depends how many people are showing up to your Olympic games!

Lingerie Party Theme: You Can’t Party Any Sexier Than This
Share