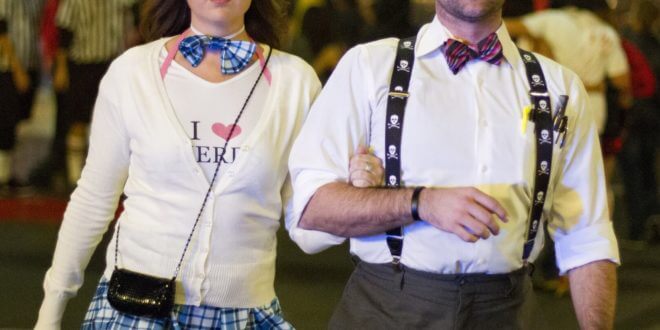 Photo by nathaninsandiego / CC BY

Ah, how the tables have turned! What was once a derogatory slur on those of the bookish slant with lower-than-average social skills has now become synonymous with wealth and success.

And what better way to celebrate that delicious example of unexpected social evolution than by hosting a Nerd Party (and maybe getting some of them laid). Break out your pocket-protectors and bowties, folks, cuz it’s time for a Nerdgasm at this Nerd Party Theme!

As with most party setups, the first decision that must be made (after the theme, of course) is the choice of venue, or more broadly, whether the party will take place outdoors or indoors. It is a rather well known fact that Nerds and sunlight do not mix, so an indoor party is probably for the best.

If that’s not enough, memorabilia from the Star Wars, Star Trek and Lord of the Rings franchises would add nicely to the ambience.

As for music, you could go for parodies of Nerd culture (Weird Al Yankovic comes to mind) and the theme songs from the above mentioned franchises. Activities can include board games, videogames (yes, nerds were geeks before it was cool) and trading card games.

For those of you that have been living under a rock for the last 25 years and are not aware of the stereotypical nerd getup, here is a basic refresher: Coke bottle glasses, pocket-protectors, fake braces, fake acne, bowtie, pants worn high on the waist and absolutely no girlfriends/boyfriends.

The only way you can pull off having a boyfriend/girlfriend here is by doing a couple nerd party theme costume. Take some time and get it looking fancy.

Some makeup to appear pasty or pale will add to the effect if you happen to be Caucasian, just like some of those nerds that never see the sun light. And there you have it, the consummate nerd. If you want to add a extra level to your costume, simply carry your old semester book around to fully get your nerd on.

For Girls:
Girls have it fairly easy, just throw on some suspenders and a little tape on your glasses & in no time you will be looking nerdy. If you really want to WOW some boys though, throw on a sexy short shirt and you’ll definitely get some eyes rolling.

For Guys:
Some may argue that the guys have it easy and they sort of do! Simply head over to your local thrift shop and mismatch some clothes. It can really be easy as that. For a added touch though, buy some knee high socks and you’ll be getting your nerd on in no time!

Assuming that alcohol isn’t like Kryptonite for Nerds, it would be quite the crucial ingredient for getting some after party hook-ups going for your nerd party theme.

A point of note, however, is that the drink choices are not nearly as important as drink presentation.

You could serve rum and coke, beer, spiked punch or even tequila shots as long as you call it “Bantha Spit” or “Orc Sweat” or something similarly creative and disgusting. If all else fails, simply bring some jungle juice and you’ll have a rocking party in no time!

Alcoholics Anonymous Party Theme: Get Your Drink On

Alcoholics Anonymous Party Theme: Get Your Drink On