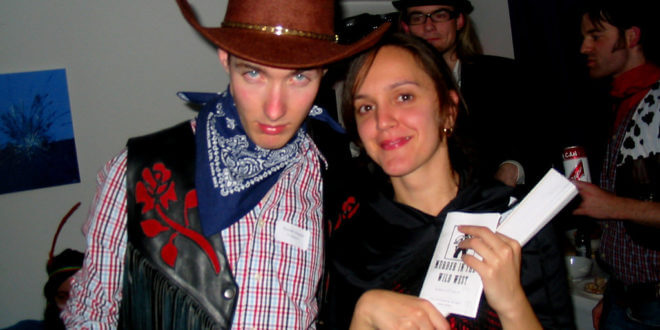 Photo by minor9th / CC BY

Have you ever enjoyed a good mystery? Maybe just a fan of some of those crime shows? Even though this party theme may not be the most popular, it can easily be one of the most memorable.

Murder Mystery Party Theme combines some of the best features of a party and combines them into one fun, memorable night. Starting either with a script or just theme, you really can have a great night. Whatever you do, do not “write” this off your party theme list!

This party theme is all about finding out to done it, who murdered who.. People set these party themes up in different ways, but sometimes its all scripted out while other times its just a big guessing game.

Since this theme requires some planning, be prepared to get a little creative. From our experience, you can take this theme a few different paths; but it’ll really come down to what type you’re looking to throw. Along with that, the more guests that show up will greatly effect how long it will take to solve the murder mystery.

Note: You will most likely want to send out invitations for this kind of party theme due to all the planning that is involved.

This will require a script to base your party theme around. Depending if you are the creative type will most definitely effect how well this script is written. If you search around the internet enough though, you can find several base ideas in which may help with your paper.

Keep in mind though, if you plan on having a script; make sure you only invite 6-10 or so people as you’ll find that it will become too hard with larger groups. Usually there should be the same number of rooms as there are the same number of weapons and players to be played in the game.

For example: If there are 10 players, there should also be 10 different rooms, 10 different weapons and 10 characters to choose from. This allows for enough variety where someone can’t just easily guess the real murderer. For added fun, make the character who is the murderer one that really isn’t expected.

Setting up the game itself will vary from party to party. From my, our, experience; I’ve found that its often good for it to be divided into different rounds where guests are given clues that will, slowly, unfold the mystery.

We told you this game really will take time to set up and we meant it! Since we know you planned this before hand, print out the clues and organize them according to what round they should be handed out. We’ve set ours up to be handed out alongside drinks so the guests will just continue to get more tipsy as the night goes on!

The point of the concealed clue is to try to get more info about different characters during the investigation to solve the Murder Mystery. For example: When Sally (Insert character)was talking about her where about’s during the party, she initially said she was in the kitchen.. But was actually talking to John earlier that night in the living room..

If anyone ask’s about this secret clue, they cannot lie but they can attempt to throw them off the clue by shifting blame onto another character.. Maybe this clue will throw everyone off, maybe it will help solve the crime all together.

This version of this party theme simply just takes the aspects of a murder mystery party and applies it to a large group. Everyone must show up acting like they are there to solve the mystery.

You can even try to adapt the script concept and plan a party wide hunt where individuals are given rolls and people must try to guess who is marked as a murder, while who isn’t one. Whoever ends up guessing right, will be able to reap the rewards of a cup of Jungle Juice.

Having decorations will change your whole party two fold. Don’t slack off on this area as thankfully; its both cheap and easy for this Murder Party Theme.

You can outline the body where your character was killed with masking tape to really get your guesting into it. Along with that, feel free to put caution tape around the scene. You can even stage things in each room such as the weapons that could of been used.

Finally, try to keep it lit dim. Most people don’t consider this aspect, but light means a lot. If you can afford it, replace most of the lights with fancy flickering light bulbs to get a really cool effect.

More often than not, Murder Mystery will require costume’s to be set to what your script says. For example; when is the murder? 70’s? 80’s? Recent times? With the time period in mind, you can dress up as a police officer, private investigator, genius, and more. If its more recent times, just have your guests show up looking spiffy; formal attire only.

Even just bringing a simple magnifier glass will help greatly with the general outfit for this theme. You could even combine some aspects of the Gatsby Party Theme into this to tie it all together too.

Following this, you also need to consider where the party itself is taking place. We’ve setup this party theme to include the backyard, garage and a whole house. Just take in consideration where the murder itself actually took place. If its the woods, obviously high heels shouldn’t be considered.

If you are trying to serve a lot of people and keep it on the cheap, you honestly can’t go wrong with some classic jungle juice or a keg. Not only will this benefit in getting your guest’s a little tipsy, but also improving the general atmosphere of your party!