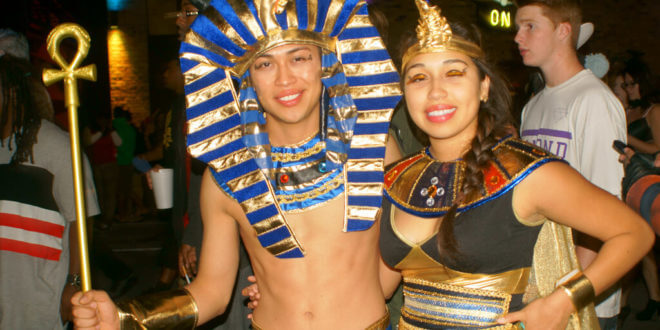 Photo by elchupacabra / CC BY

Ancient Egypt was a magical place, wasn’t it? Architectural wonders that still mystify the engineering community millennium after their construction. It also boasts a culture that weds the best of North Africa with West Asia. And who can forget Egypt’s most important contribution to the modern era…Mummies.

All jokes aside, the extremely catchy (if somewhat sexist) party theme of King Tuts and Egyptian Sluts Party Theme will certainly make for an exotic and sensual event. So prepare to be dazzled (maybe even blinded) by this amazing opportunity to do it like the Pharaohs did; in exceedingly golden splendor!

As with most party setups, the first decision that must be made (after the theme, of course) is the choice of venue, or more broadly, whether the party will take place outdoors or indoors.

My suggestion for the King Tuts and Egyptian Sluts party theme is to do so indoors, because the costumes don’t really offer much protection from the elements, if you know what I mean. There aren’t too many variations on this rather specific theme so here are some tips to help you along regardless:

Get ready for the largest collection of fake gold and jewelry you’ve ever seen. For this theme, you simply cannot load yourself with enough gold. In fact, fabric is actually an afterthought; you might just do a Princess Leia and sport a golden bikini. Guys can take tips from Stargate SG-1. The one thing to remember when dressing up for this party is that the gaudier the better.

As always though, remember to keep it sexy!! College party themes always seem more fun when less is more.. if you catch my drift!

Ancient Egypt was no stranger to alcohol. It was considered both a recreational drink and a religious one, consumed by the rich and poor alike. Wine and Beer were the drinks of choice at the time, so it makes perfect sense to emulate those choices for your own party. Don’t serve them in bottles or cans, however, as that wouldn’t be like the Egyptians would..

If you’re looking to keep this King Tuts and Egyptian Sluts Party Theme simple, I would just use a keg and maybe make some kings blood (jungle juice). With that in mind, it should hold the party off for the night!

Apocalypse Party Theme: Celebrate Like Its Your Last Days

Apocalypse Party Theme: Celebrate Like Its Your Last Days