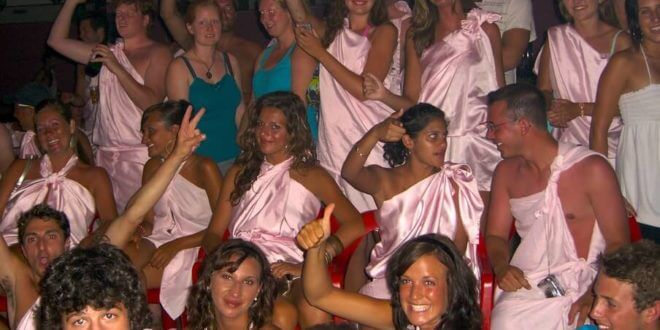 Photo by keithusc / CC BY

What do you get when you take a deity and get them plastered? Why, a grand old time, of course! Named after the controversial half-human, half-horse mascot of the 2011 Preakness Stakes infield party; the rather obscure

Kegasus Party theme can make for some of the most innovative (not to mention sacrilegious) costumes you’ll ever see at a college party. This party theme takes the good from a Toga Party and combines it with just the right about of Greek Mythology.

The concept is simple, just take any god-like being from history (or just make up your own) and give them a comedic party twist by inventing a fun power for them; in other words, become literal party gods. So get ready for a gala of mythical proportions with the Kegasus Party Theme!

As with many party themes, the first and most important decision is the venue, more specifically whether the party is to take place indoors or outside.

This is one theme which lends itself spectacularly to either preference. So it is all up to your own circumstances; if the weather’s good then go alfresco, but if not then an indoors Kegasus Party Theme is more than fine.

Since this is a rather rare costume based party theme, there aren’t many variations to work with. But here are some things you should keep in mind:

This is one of the best parties for the lazy host; primarily because it merges the concepts of costumes and decorations. The outfits your guests wear will also serve as ornaments for the venue you’ve picked; so let the invitees earn their keep for once!

This one is a toughie, thematically speaking. Since you don’t necessarily know for certain what your guests will wear, the music should be able to fit with pretty much anything under the vague “deity” tag. Personally, I would suggest music from shows or movies focusing on Greek or Roman mythology.

Regular party games will be fine for this one, because the costumes are what make the party. Have a showcase for the most interesting costume to keep things a bit competitive.

You can really let your imaginations run wild this time around as you essentially have the entirety of human mythology to work with. The key is to make it a fun costume, not just an elaborate one. So try to do a bit of research first.

If you’re not able to come up with anything, then just dress up as yourself and tell everyone that you’re an incarnation of Zeus looking to get laid. Given the guy’s history, that ludicrous scenario is actually plausible. If you really can’t find anything else to wear at a Kegasus Party Theme, just throw on a classic Toga and you’ll fit right in.

Wine, beer and colorful cocktails are all doable for this Kegasus Party Theme. Just try to serve the alcohol in goblets instead of cups or glasses. And don’t forget to stick a sign over the wine that says “Jesus was here!”

Worst comes to worst, the Cheap Jungle Juice will do too. Check out some of our Jungle Juice Recipes in the top menu bar for more ideas.