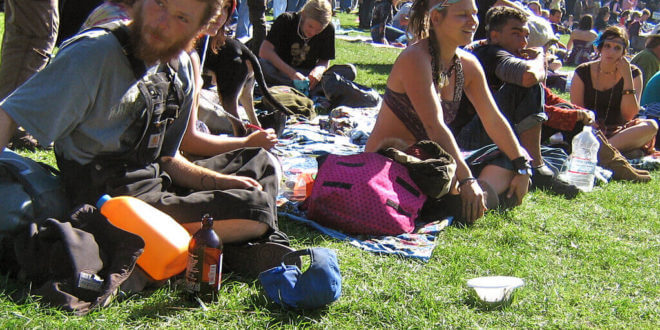 Photo by rojer / CC BY

Preaching peace, love and harmony in all things, these psychedelic soul-searchers loved them some narcotic action in between bouts of “natural” living and vegetarian meals…not to mention avoiding barbers like the plague.

That being said, they were probably the most laid-back, accommodating and fun-loving individuals you were likely to meet on this green rock, and what better way to celebrate their lifestyle by throwing your very own Hippie Party! Power to the People, Man!

While most people associate Hippie culture with living in a commune, you’ll be better served hosting this party indoors. It is much easier to setup the lifestyle through the decorations if you host the Hippie party under your roof. Speaking of décor, you’ve probably watched several movies with a scene that was set in a hippie’s apartment.

Use that image as a guide, but be sure to get some beaded curtains or necklaces, hippie posters, lava lamps and incense sticks. For seating, you’ll want bean-bags and cushions just strewn about the floor.

It’s all about weird color patterns with this theme, so be sure to get some on your walls. And for that extra authenticity, get one of those fog machines or hazers to create the impression that the place is filled with weed smoke. For music, any 70’s relaxation music with lots of flutes and sitars in them should do the trick.

Also the anti-war anthems from the Beatles should fit in nicely. And when it’s dancing time, whip out the Disco music. You may even be able to find some remixes of these old songs. This party is more about mood and atmosphere than it is about activities; so just relax and have a nice time.

This theme is also pretty easy to dress for. Make sure to dress in very colourful and comfortable outfits, with special preference for bellbottoms and shawls. Corduroy was also quite popular in the 70’s, so go nuts with that if you wish. Keep the hair long too, if you can. And large shades will complete the look perfectly. Peace out!

Depending on the time available, Hippie Juice would be a perfect drink recipe for this party theme. If you’re running short on time though, feel free to just make a strawberry jungle juice or maybe just a keg too.