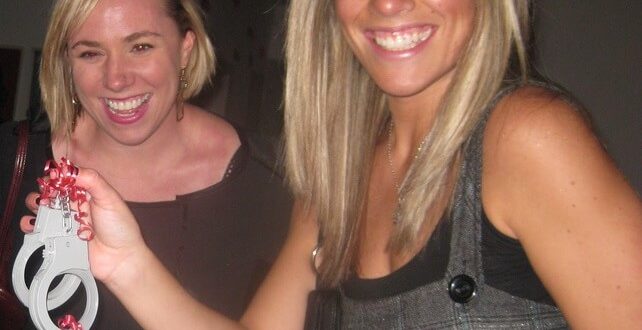 Photo by dpstyles / CC BY

Tired of friends and acquaintances always forming their own little cliques, regardless of what party they’re attending? Well, I have the solution for you; why not slap a pair of cuffs on ‘em and force the issue?

The Handcuff Party theme is diabolically brilliant in its simplicity; all you do is pair people that wouldn’t normally give each other the time of day by physically linking them with metal or hard plastic shackles.

While this might sound creepy (or terrifying) if you’re in a dungeon, it is a perfectly fun and unpredictable twist on the general party theme. So practice your icebreakers and brush up on your small talk, folks, because it’s time for a party filled with balls… and chains!

There really isn’t any major difference between hosting a Handcuff party theme indoors or outside; just make extra sure that you don’t lose the keys if you’re outside. Here are the two basic variations of the theme:

You should have simply have a good idea of this party theme from the description alone, but here it is again. Wait till about 4-5 people turn up, then start pairing them up with each new arrival.

Try to keep male-female pairs, but if a particularly hilarious mismatch turns up (six foot seven jock with matchstick-build bookworm, for instance) you may feel free to pair them up instead. If the number of guests is odd, then pair yourself up with the loner.

The music can be anything you want; though “swing music” would be particularly apropos. If the party needs a pick-me-up, then you could instigate team-based activities. Try to avoid playing a movie as that would defeat the idea of the guests actually interacting with their partners.

You’ve certainly heard of Speed-dating, right? Well, this is the same concept, merely extrapolated to adhere to the Handcuff party theme. Instead of pairing people up for the entire duration of the party, switch out the pairs every 30 to 60 minutes.

This will keep things fresh, while at the same time retaining the essence of the Handcuff party theme. Everything else is exactly the same as the other variant.

Sky’s the limit. The point of the Handcuff party theme is not the elaborate costumes but rather the anxious sense of adventure that emerges when trying to interact with someone (possibly a total stranger) without the easy option of excusing yourself from the encounter.

Since you’ve already got the handcuffs around, you might try to tailor your drinks around a prisoner/convict theme. Basically, nothing colorful or fruity, just beer and hard liquor for everyone.

Keep sodas on hand to help out those that aren’t really used to the hard stuff, because a weak Rum and Coke doesn’t really taste very different from Coke and Coke.