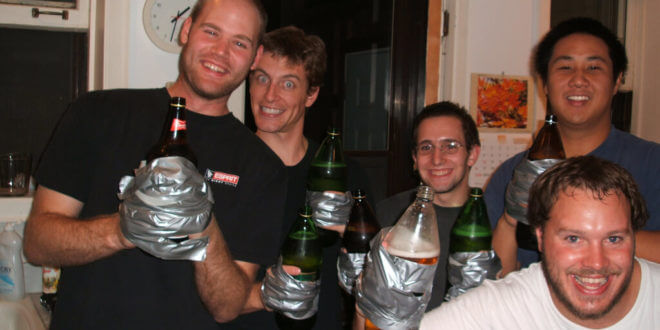 I’m sure you’re wondering, what is Edward 40 Hands? Its a lot more simple than you think! The Edward 40 hands party theme pays not-so-subtle homage to a popular 1990 movie; I’m sure you can figure out which one for yourself! The theme should be fairly simple to deduce from the name of the game.

Each attendee, upon showing up, is provided with two forty-ounce or similar sized bottles of their drink of choice; one for each hand, and expected to consume both of them in their entirety by the end of the evening, which almost guarantees a night filled with fun and laughter!

Each person attending the Edward 40 hands party theme immediately takes two bottles. These are typically forty ounce bottles of beer or malt liquor, but other products are available for those who can’t or won’t drink beer. Recent years have seen a surge of wine or “girly drinks” substituting for the beer. (I strongly recommend not trying to play this game with wine, unless you want to have a bad morning. No, really, I promise that you will have a very bad morning!)

The rules are simple. Once you receive and open your two bottles, you can’t put them down. At all. For anything. Attendees are required to hold both bottles until both bottles are empty. (I said simple, not easy!) As the liquid volume of the bottles gets lower, the volume of the party goes up proportionately!

Can you make it through both, or will you “fall out” before your bottles are empty? To prevent cheating, many hosts of the Edward 40 hands party theme insist on duct taping the bottles to everyone’s hands.

I suggest wearing loose-fitting clothing for your Edward 40 hands party theme, due to the simple mathematical equation involved. When you drink eighty ounces of malt liquor, it has to go somewhere! Have you ever tried fumbling with zippers, buttons and snaps on your jeans when you really have to go, and have a forty ounce bottle taped to each hand?

I have, and I can tell you that it doesn’t work out very well. Sweat pants or gym shorts with an elastic waistband would be ideal, although you still might need some help with them. (Be sure to invite a friend of the opposite gender who you like; things could get interesting fast!)

The main drink of choice for the Edward 40 hands party theme is, of course, the 40 ounce bottle of beer or malt liquor or beer. There are other options, however; it doesn’t matter what everyone is drinking, as long as they don’t put it down, and they’re having a great time!