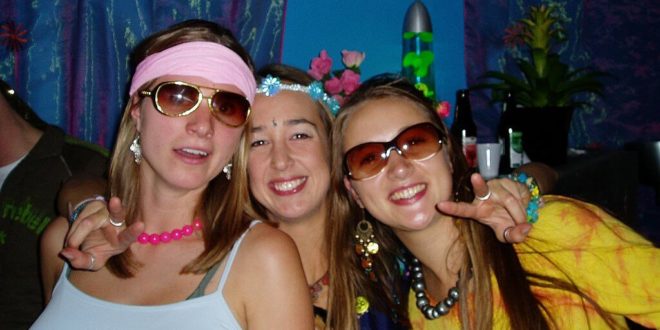 Photo by richardbogle / CC BY

Decades Party Theme: Blast From The Past

Looking back in time and being able to travel back is something that many desire.. Having a party theme that revolves just around that is simply awesome! Some will even dress up as they would back in the day and that alone might just look a little funny seeing them at your decades party theme. Sit back and enjoy the party!

First, you need to pick a decade to set as your party theme. Make sure it fits your guests though as it may be hard with some of these decades party themes. We have compiled a list of decades party theme ideas to hopefully help you choose the best these for your college party:

The Roaring Twenties: 1920s
You will find the twenties to be a time where there was much change and everyone was living up life. Just like you learned in history, this is where the jazz, flappers, prohibition and the gangsters thrived! Heck even the Great Gatsby makes a appearance.

The One and Only 1950s
Some people would just set it around the movie great, but we feel that is just way too straight forward. The 50’s is where the classic rock and roll came about along with the TV. You can go so many different ways by having a Decades 1950s party. From Elvis to being a greaser! Get creative, this theme shouldn’t be too hard.

The sixties: 1960s
This is where the hippie age shines boys! Its time to get out those peace symbols, flower, classic beach attire and even those flares. Heck, that wig is perfect time too. Some college party goers say that the 60s is the most versatile party theme due to all the hip culture change going on. Heck, this is even the age of the Rolling Stones or the Beatles too.

The Seventies: 1970s
Some call this the age of the disco and they couldn’t be more correct! This is when the hippie scene and the disco age come all together! If you are looking for someone to wear for the seventies party theme, simply dig through your parents closet, I’m sure you’ll be able to find something.

The Eighties: 1980s
The eighties were a interesting year… there was a variety of things you can wear. Usually when people through a 1980s party, you will find that people end up coming in disco shoes/pants along with the huge wigs. You really can’t go too wrong dressing up for the 80s!

The Nineties: 1990s
This is your time to shine! Most, if not all of your party guest should be from the 90s! People often will do a throwback and show up as their favorite boy band such as Insync and more. You’ll also see people showing up as characters from TV shows they used to watch back in the day.