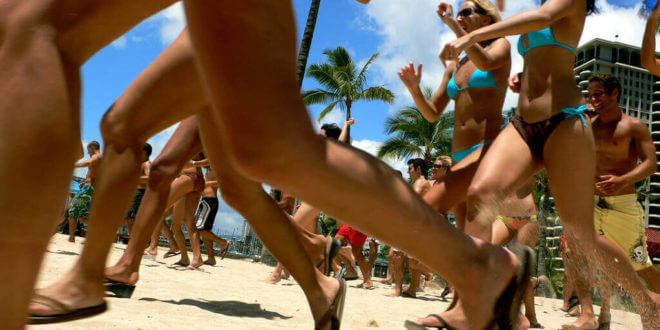 What do you call a deep laugh? A-low-ha! After that unapologetic assault on your sense of humor, let’s get on with the real reason you found your way here.

Hawaii has long been glorified as the poster island for the ideal “Paradise on Earth”. Whether it owes its popularity to movies like 50 First Dates and shows like Hawaii Five-O or simply its laid-back and fun-loving people, the fact remains that the stereotypes of Hawaiian culture are embedded rather firmly in most people’s minds.

So the idea of bringing Hawaii to your dorm is sure to evoke a sense of pure relaxed bliss and is perfect for the weekend after Finals. So leave your worries at the door and get ready to ho’ohao’oli (have fun) at your very own Luau!

As with most party themes, the first and most important decision is the venue, more specifically whether the party is to take place indoors or outside. And when it comes to the Hawaiian theme, it is an especially difficult decision (unless it’s really cold at the time, of course).

On one hand, it is really difficult to emulate the gentle breeze or warm sunlight/cool moonlight that is quite critical to the impression of being on a beach. But an outdoor party has its own set of problems, most obviously the state of the weather at the time.

Whatever you decide, just remember that in the end it’s all about keeping true to the Hawaiian spirit and as long as you maintain a cheerful and welcoming party atmosphere, the theme will definitely be a success.
Here are those two basic variants described in a bit more detail:

You’ll need to locate an actual beach for this variant, or at least arrange for an area with some sand. That is easier said than done but if you manage it, the rest of the party décor pretty much takes care of itself.

Just get some leis and ukuleles to pass around and keep some up-tempo Hawaiian music playing on your portable stereo (relax, no one expects pristine sound quality at an outdoor party).

Get a beach ball (or an actual volleyball if your guests are the athletic type) and play a fun game of Drunken Volleyball. If you can manage it, bring in a few tons of sand even!

If you could arrange for Hula Hoops or Coconuts, then there are a ton of beach games you can play.

It’s pretty much the same as the outdoor variant, except that you’ll be going for look instead of feel. Get some rocks, shells, decorative plastic coconut palms and tiny piles of sand or loose mud (don’t go crazy with that last one, just a little bit to keep up the image).

In addition to the typical Hawaiian score, you might also want to keep an overlapping track of standard beach sounds (such as soft undulating waves and the occasional sea gull cry).

Hula Hoops and coconuts will expand your activity pool and even though it isn’t exactly authentic (it’s a Trinidadian dance, not a Hawaiian one), a Limbo setup will certainly keep the party lively.

One of the best things about a Hawaiian theme is that the costumes are iconic and relatively easy to make or rent. Women can dress up like Hula Girls with flowers in their hair and around their wrists and necks.

The particularly ambitious can go for the daring Coconut bras. For guys it’s even easier; a typical Hawaiian shirt with shorts… and lots of corny lei jokes.

Ordinarily, I’m not a fan of complicated cocktails at College parties, primarily because complicated drinks are just that, complicated. And your average party animal is not a professional bartender. But for the Hawaiian theme, I’m willing to make an exception.

Try to find the simplest Pina Colada and Mai Tai recipes you can and make batches of the stuff before the party; only leaving the garnishing for the party itself. And keep some sweetened pineapple juice for the non-alkies in the crowd…that counts as Hawaiian, right?