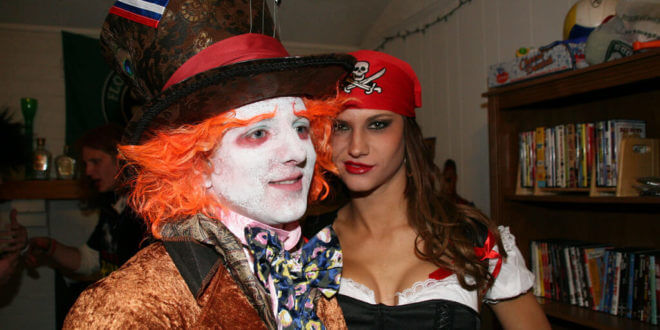 Looking for a trippy party theme? Believe it or not, Alice in Wonderland is actually about a girl dropping some acid.. Depending on who you talk too, they might think its something else too.. Anyways.. Who cares though, drugs are drugs. Heck, you could even make this theme a little bit sexy..

This party theme may seem like its something you wouldn’t want to throw, but you couldn’t be more wrong! If your cards are laid out right, this one will go down in the record books!

You could go two different ways with this party theme: Make it a rager or keep it invite only. The decision is yours but they will be completely different parties all together.

First and foremost, you need to try to figure out how big you want your party to be along with if you wish for it to be invite only or not. If it helps at all, it really depends on how big your party space is..

If you plan on having it be a crazy rager, you’ll have to sacrifice some of the big decorations and just go on the cheap. You’ll want to just get the big items such as black lights, flamingos scattered throughout your house/party area along with glow in the dark paint. We’ve had people generally follow a black light party theme which includes using fog machines and glow in the dark water.

If you want to make this glow in the dark water, simple use:

Make sure no one will be hurt if they get it on their skin or eyes. Safety is key.

The exact mix will take some trial and error, but you will get it eventually and it looks pretty crazy coming out of super soakers from the party host at your Alice in Wonderland Party Theme.

If you are going down the invite only route, you will need to get a little more creative as you’ll want to really get your guests into the theme and well.. getting crazy as possible. Along with that, you’ll need a creative way to get them to come.

This can include using the following as invitations: Watch, Mystery Drink, Letter, Playing Card with address attached and more. The key to this is just getting creative and trying to create some mystery. You will want to make sure you put enough information on your card though which should include:

After that, you will want to head over to your local party store or check out online for bulk glow in the dark items along with blacklights as everything has to glow in the dark for your Alice in Wonderland Party Theme.

Decoration wise, make sure they are bright as you’ll want them to glow. We’ve just used a lot of flamingos and playing cards throughout the party. In a way, you could easily combine this party with a blacklight party.

This is where the fun begins. We’ve had people set it up where all the girls have to wear a bright, florescent pink while the guys have to wear bright blue. Not only does this color combo look crazy under blacklights, it’ll also clearly show whos who in your party. It also looks cool when the glow in the dark water is used too.

If you want your guests to go legit, have them try to dress up as Alice herself with a short dress and hair pulled back. They really can’t go too wrong considering its just to get your messed up.

Lets be real, college is all about those drinks and this party couldn’t go more closely tied to that either! You really need to get everyone in the mood. You need to decide how much booze to bring out for this party.. We suggest going with a jungle juice or simply kegs.

If you want a funky looking jungle juice, you can make it green by adding more sprite or mountain dew along with orange juice.