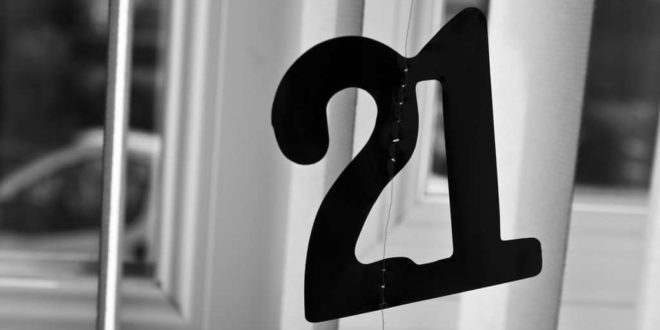 Photo by cmcgphotography / CC BY

Stuck not having cards, dice, ping pong balls or even spare change and you still want to play that a drinking game? Well don’t worry as we have that solved for you! 21 drinking game is easily one that everyone can learn. The more drinking you do, the drunker you will get and it’ll be even harder to concentrate & remember all the rules that you set in 21 drinking game.

For 21 drinking game to be successful, 21 must be played in a circle. They could be on the ground, table, coffee table, anything that you can spread out on.

21 drinking game will have everyone counting from “1” to “21” that goes around in a circle. You will start the game by electing someone to be “1” and start off the count. After that, it goes around to the right in a circle and everyone starts counting. This will continue until everyone goes up till “21”. Don’t worry, even though this sounds simple; this is just the basics of this drinking game.

This is where 21 drinking game gets a little interesting. Each player has the option of saying however numbers they want though in a sequence. They could say “4” and then “5” or just a single number thus making the pace faster. If the player says one number though, the game just goes as normal. If the player says two numbers in sequence, then the whole game goes into reverse and the player goes who just went before the current player in 21 drinking game. If a player says three numbers in a row though, the game still goes as normal and direction except the next player is skipped.

To help you out; lets say its your turn and you only say a single number such as “2”. If you just decide to say one number, 21 drinking game will continue on like normal to the person that is up next but if you decide to say two numbers like “2”, “3” then it’ll go back to the person who was just before you and they start at the number of “4”. Got it?

And finally, if you decide to say three different numbers in a row, such as “2”, “3”, “4” then it’ll skip the person who is next after you and goes to the person next to them and they will start at “5”.

Okay, I’m sure you have basics of 21 drinking game part down but I know you’re wondering where the actual drinking part may be…

In 21 drinking game, there are multiple ways that you can get stuck drinking.

Once you get a few rounds down and figured out the basis. Its time to add some new rules to the game after each round.

You could also make a rule around certain actions that are words, gestures, phrases that simply aren’t allowed anymore. You could even exclude names so that you’ll have to drink if you say someones name. Heck you can even change someones name so everyone has to call them a cuss word such as asshole if they want to say their name.

This is often a rule that is found in many different drinking games. For instance, one person will set down the thumb and everyone must place their thumb at the edge of the table. To make it adaptable for this game, you could set the person who ends with 21, be the thumb master who will start the thumb master move. If someone doesn’t notice and is last, they must drink.

Tips and tricks to 21 drinking game

Don’t get stuck ending on “18” as if its your turn, it could easily screw you over. Your buddy could set it back by saying two numbers and you’ll be stuck on 21. Always make sure you say “18”, “19”, and “20” or you’ll be stuck drinking. You don’t want to be that guy who can’t even play the game and has to bail out.

If you are looking to mess with other players, just start the game right off with multiple numbers. For example, if you look to your right but say two numbers such as “1”, “2”; the game goes into reverse and the person on your left starts and will get thrown off. If they don’t respond fast enough, they’ll be stuck drinking. If you’re lucky, the person on your right may even mess up too forcing them to drink in 21 drinking game.