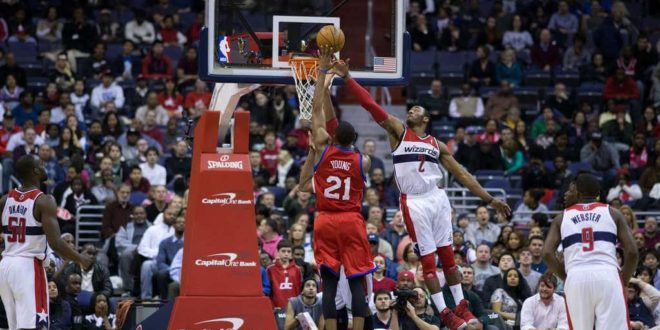 Photo by Keith Allison / CC BY

You will find this college drinking game coming in two different styles: The first stile is fast paced and where the drinking system is based on points that are scored and is goes along best with beer. The second style allows for more time in between your drinking and can easily be played with hard liquor. Obviously you can adapt this game to your own rules and create your own NBA drinking game.

Hop on that couch and start watching whatever NBA game that you feel like watching. Pull out your beer of choice, or that hard liquor and your favorite shot glass.

There is always just something entertaining with sitting on the couch and drinking booze while watching your favorite team. One unique feature about the NBA is that is one fast paced, scoring game thus makes it NBA drinking game incredibly fun. With all the moves, you might end up drinking a little more then you were planning!

With this NBA drinking game, we are gonna bet on who’s gonna be the winning team. At half time, whoever’s team is loosing will have to take a shot or a number of drinks. You can even bet on who’s team will make the most free throws and even three point shots.

Warning: NBA drinking game participants must be prepared to drink a lot fast and quick due to game play. Here are the play by play rules:

Drinking rules for when points are scored:

Drinking rules for when points are scored:

When the game is finally over, everyone who lost the NBA drinking game has to shotgun a beer or take a shot.