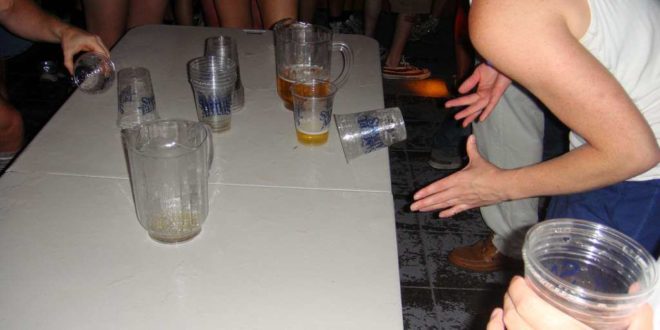 Photo by methticalman / CC BY

Flip cup is one classic college drinking game that you will almost find anywhere. You could even go as far as to call it a classic. Flippy Cup Drinking Game is perfect for large amount of people and or big parties as it doesn’t require much to get going. This is also a great tournament drinking game too with teams as you can go through the rounds fast and easy even when you’re messed up.

First, two teams must line up and stand facing each other on opposite sides of the table. Along with that, you will need a equal amount of people as you need someone to play against across from you. In front of every person, you should have a red solo cup that is filled with beer (amounts vary, we suggest you just drink from the can and leave the cup empty or make sure you have your own cup). Often people will fill the cup up to the first line or roughly a 1/4th filled with beer.

At the same time, its college so if you want to just YOLO it and forget about that cup, I really don’t blame you!

In the beginning of the game, the first person of each time will start drinking the beer out of their cup. One the player finishes the beer, they place the cup face up with part of it on the edge of the table and tries to flip it. This is where the whole name comes from, flip cup or flippy cup.

The trick is to lightly hit or flick the bottom of the cup until it lands upside down. You have as many tries as you want. Faster you flip the cup though, the faster it will go on to the next person in line and they will then repeat the process above. You want to beat the other side of the table and finish flipping all your teams cups before they finish flip cupping all of theirs. It really can get frustrating haha

Flippy cup can be fairly tough for a newbie so we suggest not having one on your team unless you want to loose! Along with that, as the night goes on; this drinking game will only get harder and harder! People will also play by their own rules too in which makes this game vary from party to party. Take the time to figure out the rules before you step right in!