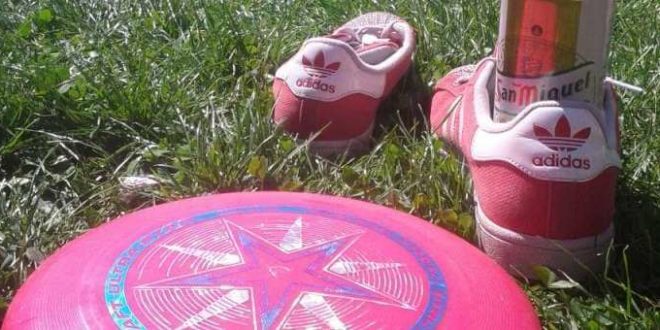 Photo by whatleydude / CC BY

There are often multiple variations of frisbee drinking game. Feel free to play as you like but we have included most common rules and techniques!

Frisbee drinking game will require a little bit more set up compared to normal drinking games. At the same time though, once you set up your course; it can be used over and over.

Set up your two poles or posts roughly chest high at a half decent toss apart (roughly 40 feet). Along with that, make sure that are sturdy in the ground. After that, place a empty beer bottle at the top the pole and or post.

Feel free to get creative here as anything could be used for your poles or posts. Just make sure that it is a fair object to throw at.

If you are worried about your glass beer bottles falling and shattering while playing frisbee drinking game, just wrap them in duck tape so they won’t shatter as easily.

These are just a few rules that are used often. You can easily create your own but for frisbee drinking game, we provided a few ideas to help start you out:

For the Throwing Team:
Start out with standing next to one pole facing each other and your goal is to try to knock the frisbee off the other teams pole. You could knock it off by hitting the pole or post itself and by a direct hit to the beer bottle. Teams must alternate when they are either throwing or defending and each team is only allowed to throw one time.

Teams can only score when they are throwing. When a team isn’t throwing, they are defending by trying to catch a frisbee. All throws made by either team must be catch-able along with they can’t throw their own pole.

Each time must throw one at a time along with one team at a time, while alternating throwing team and defending team.

More often than not, you can make up your own point system but here are some general guidelines that can help you figure out a system in frisbee drinking game.

Loser of the game must chug the rest of their drink.