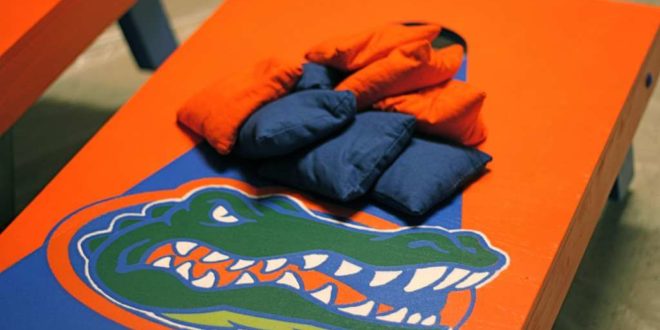 Photo by spickles / CC BY

Cornhole is classic game that’s almost considered a classic. Not only that, its a great game to play while drinking. The real question though, why not make it a drinking game too?

Here are some rules for cornhole that will get you started playing this outdoor game at your next partying event!

Cornhole drinking game is played just like the normal version except after each round (players on one end who toss their 4 bags), players have to take a drink for each point that is scored on them. Both players on each team have to drink. For example, if the red team scores 2 points against the blue, the players who are on the blue team will have to take 2 drinks.

Once one of the teams end up scoring 21 points on the dot, the game is than considered over and the losing team (both players) must either shotgun a beer, chug, or bong a beer using a beer bong.

The winning team will get to continue play and another team will challenge them/a rematch will occur. If you are looking for a added challenge with cornhole drinking game, make each point worth 2 drinks or more!

Cornhole Drinking Game required the same set up as any other cornhole game. Make sure you have enough space to be able to clearly toss the bags without hitting anything and enough players where you can play a few rounds without getting to buzzed.

Cornhole drinking game has a variety of rules along with types of games you can play.

Players have to agree on the bet before anyone throws any bags. Bets can be made team wise and or just to specific players or even both. Having multiple bets though will get you more messed up.

This version of cornhole drinking game is meant to get you drunk slowly instead of fast.

Each time a bag ends up inside the hole (regardless if they are knocked in), the other team must drink. For example, the blue team throws a hole in one. The red team then has to drink.

This slow approach to cornhole drinking game will let you play a lot more games and you will most likely be able to walk away still standing.

Every half inning, players will have to drink for every points that is scored against them. For example, the red team scores 3 points. Than the blue team will have to take 3 drinkings.

This will result in one team taking atleast 21 drinks and or the one team getting pretty close to 21 drinks. This is a perfect version to get your day started!

This cornhole version allows for players to call out a bean bag toss that will be classified as the shot toss. If they feel that they will be getting it in the hole and calls it, this will require the other team to take a shot if they make it in. If they don’t, the team who called the shot has to drink.

For example, if the red team calls the shot bag and gets it in the hole. The blue team has to either take a shot or three drinks.

Instead of just calling out a shot bean bag, you can purchase special drinking bags or label yours with a sharpie. The eight bags will be labeled with drink, chug, social and shot. Divide these bags on each time so each players only ends up with 2 labeled bags. Add in 2 more unlabeled bags.

Start the game and if one of the players ends up scoring a hole in one with these special bags, the opposing team must comply and do what the bag says. There can be a strategy to this if you play the bags last or first depending on how you approach cornhole drinking game.