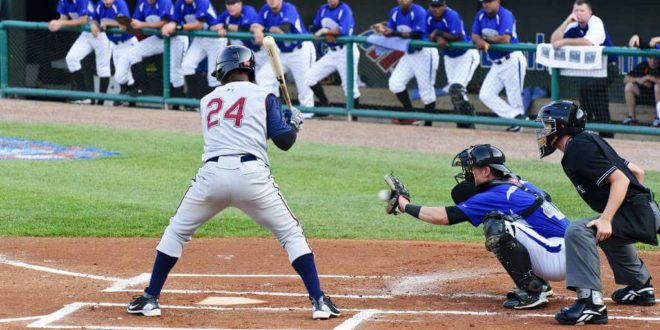 Photo by Randy Pertiet / CC BY

It really turned out to be one of the best games we’ve played at my apartment and I recommend others give it a shot too. Your goal is to throw a ping pong across the table into one of four cups.

We ended up playing a version where you also play flip cup to score extra points by stealing. Essentially, its two different games combined into one and gets twice as many people involved compared to just beer pong. It may be complicated at first, but give it a try and once everyone gets it down; it’ll be one great game!

First, you’re going to want to get the table in a place where people can get on all four side of it. Similar to a beer pong area but the more space, the better! You will then place four cups in a line that goes along to the edge of the table. Baseball drinking game has a sorta hard set up. To help you out, check the diagram below to help with the cup placement for this game:

Note: It really does need a lot of space, otherwise it’ll just be annoying and people won’t be able to play well.

In the center, there will be two rows of three cups that are on either short sides of the table that each team will use. Make sure there is enough space in between each cup as you need enough room to play flippy cup. Make sure there are 3 rows of cups on each side for you and the opposing team.

You will should now have four cups on each side that are in a straight line. These are the batter cups for someone to throw the pong balls into. You can fill these cups with beer, but we suggest just having a beer next to you to use instead and just fill the cups up with water just cause pong balls will be dipped into each cup.

If you are using beer in baseball drinking game, fill the cups accordingly:

If you are using water in this game, just have a beer by your side and drink for:

You will have three cups on either side of the long part of the table. These are your base cups and should be spaced out and around 1/3rd full if you are using beer. We also ended up playing it with cups that were half wull too. More the merrier haha Its common to find different amounts for each base but that can just make things confusing considering you’ll have to keep refilling each cup with set amounts and pouring out if you screw up the amount.

If you are using water, just fill them and drink for 2 seconds if you have to drink.

Now that the set up for baseball drinking game is complete, you will need to start figuring out who should be on your team. From experience, it’ll only be fun if you pick equal teams. Don’t stack your own team.

Each baseball team amount can vary but you need at least four on each team or even numbers to play against each other. We suggest having a group of friends play together or have a team captain get everyone together and start picking players.

Oddly enough, this baseball drinking game is very similar to actual baseball; you will have team that’s the outfield in which will be protecting the bases and a team that is up to bat. Once they get three outs, each team will switch and the other team will be up to bat.

For the team that is up to bat, there is three different ways you can get out:

For the outfield team; which are the ones that are NOT up to bat, will be placed accordingly across the opposing teams first, second and third base. The last team member will be trying to catch the ball if it happens to bounce of the rim of any of the cups when the opposing team is shooting.

Okay, its starting to get a little confusing! I get it, just hop down below to see a video to help you fully understand. Don’t give up on this game yet!

The winning team will be marked the winner of baseball drinking game after nine rounds of play. If you are looking for a shorter round, you can also play just six. Sometimes people will call it little league baseball.

Batter up: Being at Bat

When your team is at bat, they will be throwing ping pong balls across the table into the straight line of cups that are the opposite of them. If a player makes a cup, the opposing team has to drink the cup along with all the ones below it. If you are using water, follow the directions above for drinking directions for each base.

For example, if you make a home run; the opposing team must drink that cup along with the 3 below it. Once all the cups are empty, they must be refilled. If you are using water, follow the drinking seconds above.

Each player gets three strikes (attempts) at trying to get the pong ball in one of the cups.

If a player makes a cup, then they are automatically on base. Based on what cup they get, they stand by the base that they made it into. For example, if you shot it into the 3rd cup, you would go to 3rd base.

If you are wanting to steal a base in baseball drinking game, all cups must be filled. If you attempt to steal a base when the opposing team is filling up any cups, then they will be sent back. How do you exactly steal a base though? You simply just play flippy cup against your opponent that is protecting the base across from you. You can try to steal a base anytime all the cups are full. Simply just start drinking your drink and start playing flippy cup. The person across from you will have to notice that you are drinking fast or else they’ll let you steal the base. If the runner beats the person protecting the base, then they get to move forward to the next base in line. If they happen to loose though, then they are out and the whole team gets a out.

Baseball Gameplay: Watch these guys show you how its done

We have included a video for you to help you understand the game. They are playing with beer but water is much cleaner and easier to use.. Plus you aren’t stuck worrying about the nasty who drank out of the cups…