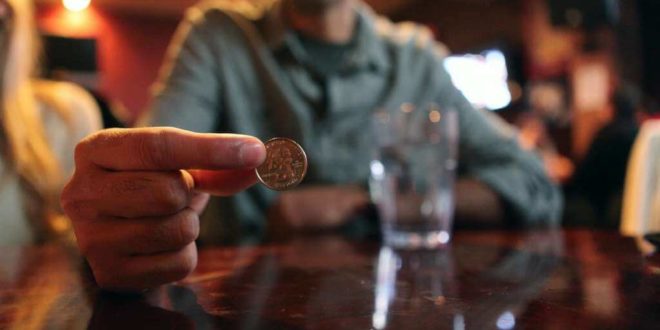 Photo by evanblaser / CC BY

Have all the players who are planning on playing this game get around a table and have a full glass of beer sitting in the middle. After that, shotglasses and quarters need to be passed out to two separate people that are sitting across the table on opposite sides. It may sound complicated, but read the rules cause this game is pretty straight forward.

We have also played a few rounds with only taking shots. It gets extreme, I get it but heck; your night starts off faster than you ever planned!

Two players need to have a shotglass and quarters in front of them to start the game. From there, they will try to bounce quarters off the table until one of them lands in a shot glass. The player who is bouncing the courts is called the “shooter”. Once the player makes a shot into their shotglass, they will pass the quarter and the shotglass to their left.

The goal is to pass it quickly as possible to avoid the other shotglass from catching up. The game will keep contining until the shotglasses catch up to each other. Then, the player who was slowest has to drink the beer that is placed in the middle of the table. After that, quarts drinking game will start all over.

If a player makes it in the shotglass right off the bat, they can pass it to anyone that currently doesn’t have the other shotglass. If you by chance have a large group and still looking to play, you can add more shotglasses and quarters. Simply make sure you have them evenly spread.

Most players will bounce the quarters off their face. Some variations require you to bounce it off the side though. Make sure that the table you are using too. In the past, we really tended to chuck these quarters down hard.