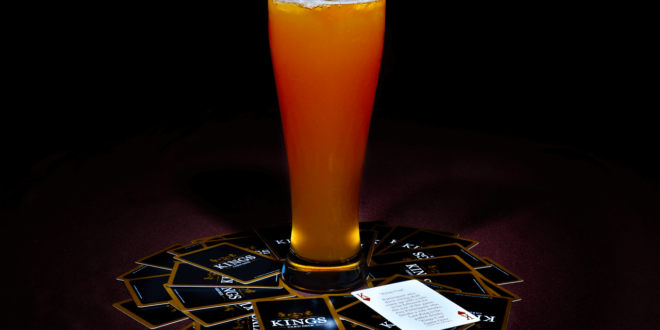 Photo by Michael Morales / CC BY

Kings cup drinking game is a classic and also knows as just kings, Ring of Fire and even circle of death drinking game. This is one popular drinking game that you find at campuses throughout the nation. Its fairly simple too and doesn’t require too much.

This game is sort of like beer pong except you all are in a circle and each player has to drink based on what card they draw. We suggest a little pre-gaming though as some of these rules are straight forward and can be too easy at first. You might even just want to write them out too.. Safes some time.

First, you need everyone to be sitting around in a circle; either on the floor or around a table with a drink. Even though the majority of these drinking games call for just beer, kings cup drinking game is commonly played with mix drinks or both beer and mixed drinks. The decision is really up to you but we suggest mixed drinks.

If you end up playing with both though, keep in mind that whatever you put into the drink; at the end, you have to drink the awful cup of whatever is mixed.

Shuffle all the cards together and make sure that they are spread out around the empty cup (kings cup). Often you will find kings cup being a special glass, jar or even das boot.. Anything will work though, just make sure it can fit all the mix.

Often you will find everyone with their own rules at the party you are at but these are the common rules for kings cup drinking game. This game is fairly simple. You simply will go player by player in a circle clockwise and doing the action that the card in which they drew.

This person is the game rule master now! They set the rules and can set any rule that will stay for the rest of the game or until another jack is drawn. You can even make it so people can’t say names, or certain words like “drink”. If someone breaks the rule, they must drink.

The player who drew the card can pick any other player to drink.

The player who ended up drawing the card has to drink themselves.

All the girls who are playing must drink.

All the guys who are playing must drink.

Right when this card is drawn, everyone must point straight up and the last one to point up has to drink in kings cup drinking game.

This rule will take some thinking. Everyone starts by holding 5 fingers up and the player who pulled the card says “Never have I ever…” and tries to say something that someone else might have done before. Anyone who has done that will have to take a finger down and drink. This will continue in a circle until someone has all their fingers down.

Note: This can get fun and you can find out things about other people… “Never have I ever had anything with the butt..”

This is a fairly straight forward rule and requires everyone to just rhymes. The person who ended up drawing the “9” has to say a word and everyone has to rhyme off the original word. Each word cannot be said twice though and whoever can’t come up with a word must drink. Usually we wait 5 seconds for the person to come up with someone and if they can’t, they automatically loose.

For added fun, you can also rhyme off a phrase. As the night goes on though, it’ll either get more easy to rhyme or harder.. For me, usually harder..

The person that pulled the 10 has to start off by saying any word and the next person will then say this word and also add another. The following person then must say the word the first person said, plus the second and add their own word.. This will continue on until someone messes up and or can’t remembers the words; in which they must drink!

Thankfully though the sentence can be anything you want, long as they are words!

The player who drew a “Jack” simply needs to pick a category. They can either pick things like “beer names” or even “drinking games” and more. You really can’t go wrong. Each player then in the circle has to name off something that is within that category. The catch though is that it must be a item and no item can be repeated. Whoever can’t think of a item or says something outside of the category must drink.

This is fairly simply and all the person who drew the queen needs to do is simply ask a player a question. The player in turn has to ask the player next to them a question and so on until someone messes up. No single question can be repeated. Whoever can’t come up with a question or says something that isn’t a question, must drink.

This is the deadliest rule in Kings cup drinking game. In fact, you will want to avoid this as much as you can. The first three players who draw these cards can put as much of their drink into the kings cup. The last person to draw a king must drink whatever is in the cup. Once all the kings are drawn and someone drinks the cup; this is the end of kings cup drinking game.

A lot of people will play by different rules and it’ll vary from place to place. Here are a few rules we don’t usually play by, but should still be mentioned! If you feel we missed a rule, feel free to drop us a line and we’ll try to add in next!

All the players who are playing have to hold both of their hands in front of them like they are holding a steering wheel. The player who drew the “5” gets to start the drunk driving by turning their imaginary steering wheel in either direction while saying “Va-roooom”. Anyone can change the direction with your imaginary steering wheel though by simply saying “errrrr”. Once it changes direction, the game should be going in the opposite direction. This will all end when someone messes up or says the wrong word in which they have to drink

This one is a hard rule.. The player can’t stop drinking until the player to their right stops drinking except the person with the ace. The person who drew the ace can stop anytime they want along with skipping out all together. This person basically is the leader in terms of how long the waterfall will continue.

There are quite a few rules you can make for aces or any other card. We’ve compiled a short list that may spark your interest.. Some are a little extreme, but they are all good fun!

his gets hilarious when people start getting pissed. Example: You guys suck suck.

This is one of our favorite, whoever is laughing must flap their arms violently until someone else is laughing. Due to how funny this looks, everyone will be cracking up before you know it!

Everyone must act like its the olden days and talk in renaissance style!

Some people also play this rule if they swear, then they must take off a article of clothing.

Very similar to thumb master, except you have to put your forehead down on the table instead of your thumb. You will be surprised how fast people will smack their head against the table.

Just like Forehead master and thumb master, one must put their crotch (girl or guy) against the wall.

You must make up a nickname for the person to your left in which will last the whole round. This new nickname that has been created will last until the next round. If anyone messes up, they must drink. If no one remembers anyone’s nickname, man.. There will be a lot of drinking ahead.

Lick the card and stick it on your forehead, long as it sticks; you can make any rule or ignore any rule.

If you have to drink, you must lock your elbows in and drink like a t-rex would drink. If you happen to forget, you must drink again.

Just like with the t-rex, one must lock their elbows in and drink.. But they also must keep their hands flat and not grip the cup.

If you get to make someone else drink, you must lock eyes with them and touch their chin.. Followed by asking them in the most polite and snobby way, to drink.

If you swear, you have to write that swear word on your arm… This becomes hilarious when people are going out after and a whole group shows up with swear words all over their arms.

Simple as it sounds, no pointing is allowed

If you happen to make eye contact with someone during that round and one of the parties points it out; they must have staring contest. Whoever looses or gives up must drink.

When you are about to drink or have to drink, one must take off “The Little Green Man” from the top of their can. This man is imaginary though, so don’t forget. If you forget, you must drink again until you remember to take him off and put him back on.

Some people play a version where you can give away the little green man to the person who forgets to take their off/”swallows” them.

For example: Alex would be Alexa, Sam would be Samantha and so on. If the name doesn’t work, just add a “a” or “artha” to the end of their name and continue on.

If you touch your phone at all during the game, then everyone else can send one text to any of your contacts.

This one is a favorite. The only people who are playing the game can talk to each other. Everyone who isn’t playing the game must talk through the Minister of Foreign Affairs and relay the message to the player. If the player talks to the person directly or not in third person, they must drink.

This is similar to thumb master, but instead; the person puts their hand up to their ear like they were listening into a mic like the secret service. As everyone starts putting their ear up; when one person is left, everyone yells “GET DOWN MR. PRESIDENT” and tackles the last person left.

Everyone must wear a bottle cap/beer cap on their head and every time it falls off, they must drink.

Every time the rule maker gestures like they have horns, everyone else must start paddling rapidly. Last one to notice has to drink.

If someone hasn’t done anything in a while, just call them Jill after their hand..