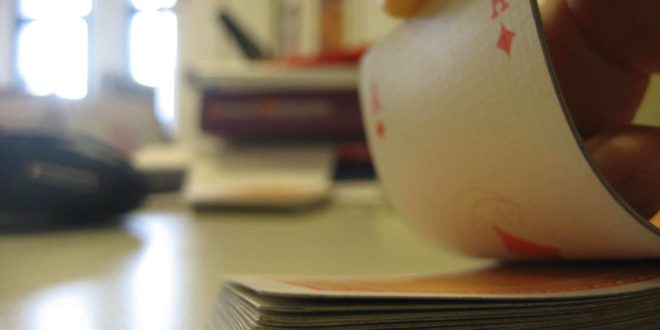 Photo by cristic / CC BY

Give or Take is a great game to play when you are already feeling it! Its main goal isn’t about drinking but more embarrassing and or saying the truths that people wouldn’t usually say when they are sober! In short, I wouldn’t play this starting off sober unless you want one awkward start to your night!.. Check out (Insert link for another article) for that! This college game is perfect for finding out that one secret you’ve always been wondering!

Everyone just needs to be sitting around a table.

Shuffle all the cards up so they are well mixed. After that, pass out four cards to each player face up. After that, make two rows of 6 cards that are face down. One row will be truth and the other side will be the dare side.

Start the Give or Take drinking game by taking the truth or take pile and flip the card over that you designated for two drinks. Whoever has the card has the option now of taking either 2 seconds worth of drinks or answering to a question that the group has agreed upon asking truthfully. If no one ends up having the card, you may replace it from the left over deck as needed. If two players end up having the same card, it’ll go to playing rock, paper, scissors. The loser ends up having to drink and the winner ends up having the choice of taking a 2 second drink or telling a truth.

After this, the game hits up the dare and give side. If any of the players have a matching card in the row, they are allowed to give the designated amount of drinks to anyone and in return, they receive a dare from the person whom the drinks were given too. Rules apply if multiple people end up with the same card or if no one has the card that was flipped.

The Aces Rule: If you end up getting an ace right of the bat, you are gifted with being able to create a drinking rule. If an ace is found in one of the rows, the one who has the most suits will be able to create the rule. If a tie ensues, it will go to rock, paper, scissors. Lower ends up drinking like always and winner ends up making the rule. Cards in the left over deck is used to replace the ace.

Give or take drinking game seems complicated at first but once you figure it out, time will fly and you will end up hearing stories, secrets, and more before you even know it! Perfect for creating a memorable night.. If you even manage to remember it.